If you’ve been following along recently, you know we’ve stopped publishing and are on hiatus. This happened for a couple of reasons. The inciting incident, so to speak was that Salome, our acquisitions editor was very  ill and in the hospital for weeks. Then she spent months recovering.

But underlying issues also existed.  Salome and Tim are both freelancers and the illness was the last in a string of things that took a toll on their finances. The publishing we do here at Ghostwoods Books has never paid them anything like a living wage so they have to do contract writing and editing to make ends meet.  Those contracts are hard to come by in some parts of the year, especially around the end of the year. So this past year has been even more of a struggle than usual.

We’re still not completely ready to get back to publishing, but what we’ve agreed to do is to try to establish ourselves as more creatively involved in the books we publish. 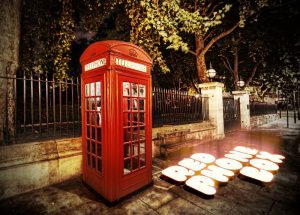 Red Phone Box was the first book we published that was written by numerous writers. Salome and Tim were both hugely involved in the way the book turned out as they had to coordinate the stories so that they formed a collective novel or story cycle. Massive edits ensued. We have often considered doing another book like it, i.e. a story cycle or collective novel where each chapter was written by a different writer (although some writers would write several, non-consecutive chapters).  We have had to rule out writing a sequel to Red Phone Box itself, although we wanted to, because we don’t have the rights to the characters that would allow us to do a follow up without specific agreement from all the writers, which we’ve been unable to acquire. (We can’t even reach some of the writers.)

So we want to start fresh, choose some writers, have a big brainstorm session and hammer out an idea. Then we’ll decide on some characters, do a rough outline and work  together on the actual writing. One person, one chapter will still be the way it’s written, but there will be more guidance so we don’t have to make so many changes in edits.

In order not to disappoint the writers, we will not begin the actual writing until we’re sure we have funding. We can’t afford to do the book without funding, and we don’t want writers to do the work until they know they’ll be paid. So we will do the Kickstarter after we’ve assembled a team and a process, but before we’ve started the actual writing.

This is very early days, so we have some more thinking to do about the entire project. But if  you want an idea of what it will be like, take a look at Red Phone Box.

If you’re a writer interested in potentially being a part of this project, drop us a line at ghostwoodsbooks@gmail.com to get updates on how we’re progressing. Again, we will select writers, sit down together virtually and brainstorm, do some planning and then Kickstart it.  The book will probably be of the dark-ish, urban fantasy variety, in case you’re wondering.

It’s gong to take a few months, at least, before we’ll be writing the thing. Just to warn you. But there will be some things to do in the meantime. Stay tuned for progress reports.

Date: 26 August, 2017 For immediate release SUMMARY A progressive Anglo-American press is producing an anthology of stories which portray Donald Trump as a Lovecraftian abomination. DETAILS The King in Orange: Shadows Over the White House contains more than fifteen stories of cosmic and supernatural horror written by an assortment of professional writers and wordsmiths. […]