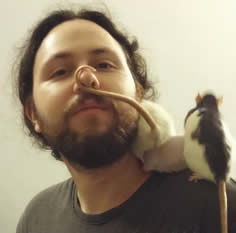 Uri Kurlianchik has been earning a living as a writer/gamer and working for himself since he was in his twenties. To supplement his RPG writing and fiction writing incomes, he teaches kids how to play RPGs in after school programs. He began depicting his experiences as a games teacher in a comic called DND Kids drawn by his friend illustrator Jamie Keys, when he was encouraged by the response to his posts about conversations he had with the kids on Facebook.

Since we began publishing the weekly comic on our site, we’ve received numerous questions about how someone might get a job like Uri’s . Today will be the day you can ask him. Bring your questions. Read him from 1-3 EST on @GhostwoodsBooks. Tweet him with the hashtag #askuri.

There’s a DND Kids book in the works, which will be the first mostly illustrated book for Ghostwoods Books.

making a living as a creative