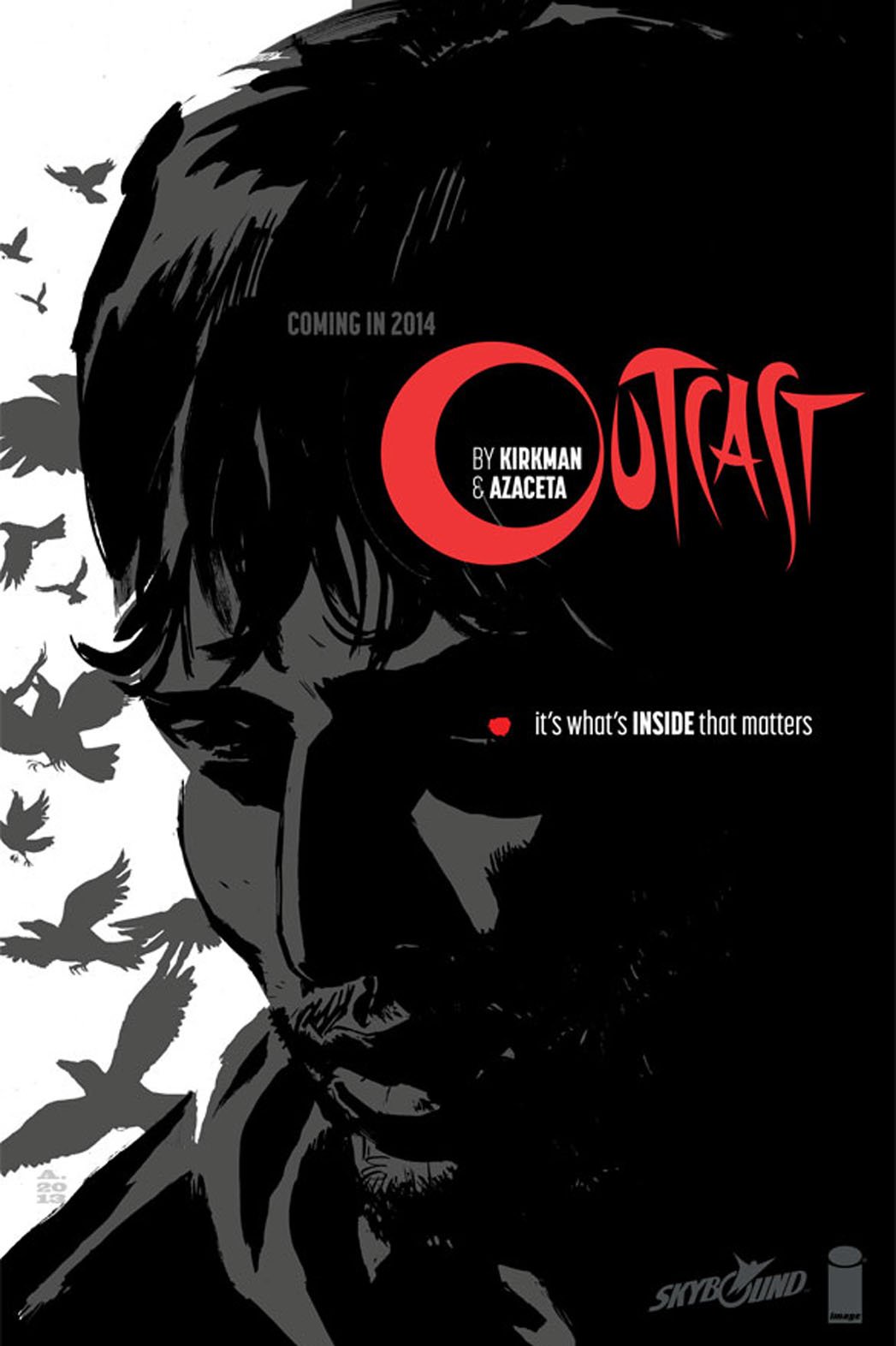 Alasdair reviews Outcast, the comic, in preparation for the new TV series. 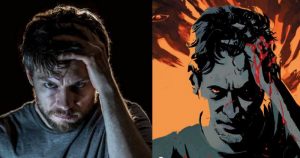 Kyle Barnes has returned home, with blood trailing behind him. Something dreadful happened between Kyle, his wife and their daughter and now he’s sleeping in the mouldering ruin of his childhood home. The place where his mother violently abused him and where, one day, he did the worst possible thing he could do — fight back. And win. 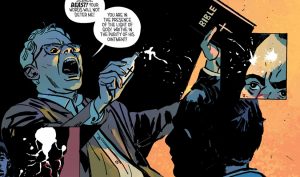 Reverend Anderson has returned to his calling with a new found strength. The town preacher, Anderson’s fire and brimstone approach isn’t just for show. There are demons in his flock. Demons living on his streets. He’s seen them. So has Kyle. He just doesn’t know it yet.

Created and written by Robert Kirkman, co-creator of The Walking Dead, Outcast is a smaller scale and infinitely more grim piece of work. Where TWD is ultimately about rebuilding around catastrophe, Outcast is about acknowledging the wounds that personal armageddons inflict and trying to live past them. It’s a quiet, wounded book about a quiet, wounded man and anyone expecting the expansive, post-apocalyptic soap opera of TWD is going to be disappointed.

This is a book that pulls no punches whatsoever. The opening scene deals with auto cannibalism in a possession victim and it’s a statement of intent for the rest of the book. The exorcisms we see are brutal, untidy first fights. The past of each character is dipped in blood and violence is a constant threat on the suspiciously quiet, polite streets of Rome. That’s just the tip of the iceberg too, as Kirkman uses the book to explore the consequences of abuse. Kyle, in particular, is a wounded animal of a man, buckled in two – not by what he went through but by his memories and guilt. For him, the revelation of the demons and their role in his life is an escape hatch. It wasn’t his fault. None of it was his fault.

And none of it, he and we both find out, is easy. Kyle’s newfound zeal is an interesting contrast to Anderson. Initially a Soldier of God, Anderson’s journey through the book is fascinating. He discovers nothing he did may have been enough just as Kyle discovers what he can do. Both men explore the idea of powerlessness from entirely different directions, and both come to accept what they can do far more than what they think they can do.

Kirkman is a ludicrously tidy writer and that’s on display here. Every character, especially Kyle’s cheerfully fou-mouthed foster sister and her patrolman husband, echo the central themes of the book. Everyone in town is hiding something, and everyone in town is hiding behind the polite lie that everything is fine. Everyone aside from Kyle and Anderson, which gives Kirkman an opportunity to do some wonderful Bodysnatchersesque paranoia. The reason for the possessions is hinted at in these two volumes and when that plot bomb goes off, which it will, none of them will be able to hide from the truth. They are here. They have been here for a long time. They are hiding in us.

Kirkman’s script is great but the art is where the book shines. Paul Azaceta and colourist Elizabeth Breitweiser cast Kyle and Anderson’s world in pre dawn and pre dusk colours, constantly showing the heroes labouring through quiet woods and street shot through with black, purple and menace. It’s a constant level of tension, the characters’ fears coded into every line so they become the readers’ fears too. There’s one expansive, half page splash where they watch the sun come up over the mountains, where you and Kyle breathe out almost in unison. A later moment where he realises just how many people are watching him is just as expansive but offers no peace. Just the uncomfortable garage forecourt-lit realisation of someone being horribly outnumbered and trapped on their enemy’s battlefield.

The art is consistently amazing and the lettering, where it meets the script, is just as impressive. Rus Wooton’s lettering delivers the different cadences of each character and very clearly delineates the human from the inhuman. Lettering is one of the great overlooked arts of comics but without it the entire book falls apart. Here, with lettering from one of the best in the business, everything works.

Outcast is strong stuff from the first page to the last. This is an unrelenting story of pre-supernatural apocalypse that tackles issues of abuse and neglect at every level and backs down from nothing. What could so easily be sensationalistic instead reads as small scale and character driven horror that never leans on those issues for cheap thrills. As a result of that, and the fantastic art team, Outcast has established itself as a major horror title in just over a year of publication. It’s a tough read but always an engrossing and often brilliant one. If you’re a horror fan then you need to pay a visit to Rome. Just don’t stay too long… 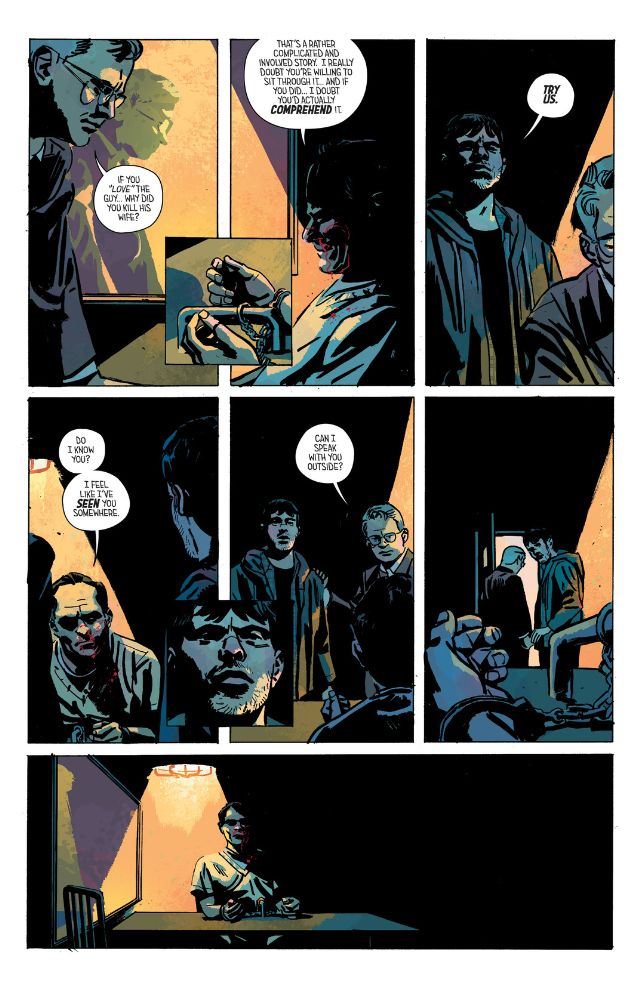 Outcast Volume 1: A Darkness Surrounds Him and Outcast Volume 2: A Vast and Unending Ruin are both available now, published by Image comics, priced £7.50 and £10.99 respectively. Thanks as ever to Travelling Man for the review copies. Amazon US  Amazon UK

Outcast is now an American horror drama television series based on the comics. A ten-episode first season debuted on Cinemax on June 3, 2016.